I have an aversion to remakes, which is ironic because I'm in two of them right now. When I went back and watched T3 recently, I thought we need to make a better movie. I can't say I'm a fan. 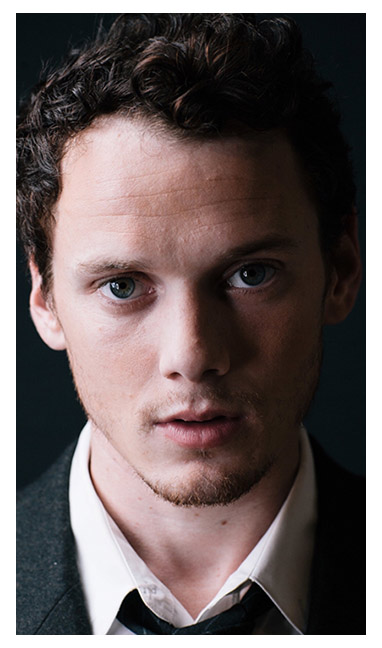 Anton Viktorovich Yelchin was born in Leningrad on March 11, 1989 to renowned figure skaters Irina Korina and Victor Yelchin. Amidst rising anti-Semitism and the fall of the Soviet Union, Victor and Irina emigrated to Los Angeles with Anton when he was six months old, in hopes of giving their son a better life. Upon arrival, Victor & Irina were interviewed by the Los Angeles Times, and Irina told the reporter about a woman on the street who had seen baby Anton in his stroller and told her “He’s beautiful. He will be an actor.”

Although young Anton was naturally shy around people, he came alive when creating and telling stories. When a family friend suggested that Anton should take acting classes, it not only helped cure his shyness, but also gave him the tools to hone his creativity into what became his career.

As Anton began to book commercials and television appearances, his parents decided to introduce him to classic cinema; and Space Jam and Terminator gave way to Scorsese, Fellini and Kubrick. Anton immersed himself in great cinema and studied all facets of the process, driven by a hunger to create, express, and grow.

Almost immediately, Anton had the opportunity to be work with and be mentored by legends in the field – Albert Finney in Delivering Milo(2000), Morgan Freeman in Along Came A Spider (2001), and Anthony Hopkins in Hearts In Atlantis (2001). He appeared on small, but pivotal roles on television mainstays like ER, The Practice, and Curb Your Enthusiasm.

Although cinema was his first and greatest love, it also led him to his other artistic pursuits. While working on his film debut A Man Is Mostly Water (2000), Anton learned how to play guitar. Soon, he was composing songs for his mother, creating experimental tape loops in his room, and eventually fronting a punk/rock/blues hybrid band called The Hammerheads. Fourteen of these songs were released on the Love, Antosha soundtrack, with future releases to come.

When he was 12, he watched the documentary Stanley Kubrick: A Life In Pictures; and upon learning that Kubrick had started as a still photographer, he got his first camera and began to take pictures. Early pictures were of his parents, the family dog, and flowers in the neighborhood; but as he grew older, his photography grew in scope and ambition, creating portraits of the Los Angeles underworld that were haunting, layered, and darkly humourous. His work was published in magazines like Bullet, Autre, and King Kong, his images have now been displayed at galleries around the world, and a book of his photography – In Case of Fire – was published in 2019.

He filled notebooks with poetry, film criticism, and philosophy, keeping a record of his artistic growth. He wrote detailed notes about every character he played, filling the margins of his scripts, and this dedication served him well as he entered his teenage years and appeared in films like House of D (2004), Fierce People (2005), Charlie Bartlett (2007), and Alpha Dog (2006). Gradually, he came to be known as one of the hardest-working young actors in Hollywood; but more than anything it was his decency and authenticity that resonated with audiences – as Rolling Stone referred to it, a “quietly brilliant quality of regular-guy-ness.”

His role choices were bold, searching, and deliberately varied – futuristic freedom fighter Kyle Reese in Terminator Salvation (2009). The lovestruck carpenter Jacob Helm in Like Crazy (2011). A son grappling with his father’s toxic legacy in The Beaver (2011). Regular-guy action heros in Odd Thomas (2013) and the Netflix series Trollhunters (2016). A struggling writer in an unconventional relationship (5 to 7; 2014), a young, suicidal gay man wrestling with bipolar disorder (We Don’t Belong Here; 2017), and a musician on the cusp of local success (Rudderless, 2014). He fought vampires in Fright Night (2011), befriended them in Only Lovers Left Alive (2013), and had to put down his zombie girlfriend in Burying the Ex (2014). He went to the stars as Pavel Chekhov in the Star Trek reboot trilogy (2009, 2013, 2016), and came back down to earth to fight real-world evil in Green Room (2016). He once told the Hollywood Reporter that his “guiding factor” was “how many different people can I play, and how different can I make them”.

When Anton passed away unexpectedly in June 2016, he left these performances and more (including three additional films – Porto, Rememory, Thoroughbreds – that were released posthumously). He left thousands of photographs, dozens of songs, the ache of his unfulfilled potential, and a legacy of decency and hard work. “Yelchin was one of the most talented actors of his generation, and deserves to be remembered for the entirety of his impressive resume” (Olivia Truffaut-Wong, Bustle.com).

2019 saw the release of the documentary Love, Antosha (directed by Garret Price). Built from archive footage and the memories of over 60 friends, family, and colleagues, the film showcases the many sides of Anton the public didn’t get to see while he was alive, and the impact he had on those he loved. It explores his successes and struggles, and lets viewers get to know an extraordinary person the world was cheated from seeing grow old.

We hope that this site can serve as a meeting place for his fans; as a memorial for a man, friend, and son who is still missed; and as a tribute to an artist whose work, spirit, and example lives on.